R-squared To Evaluate A Regression Model

27 Feb 2017 Evaluating a classification model is fairly straightforward and simple. You just count how many of the classifications the model got right and how many it didn't.

Evaluating a regression model is not that straightforward, at least from my perspective. One of the useful metric that is used by a majority of the implementations is R-squared.

I know the terms might be a bit overwhelming, like the majority of statistical terms, but the explanation is quite simple. It is the percentage of variation from the mean that the model can explain. In simpler words, R-squared shows how much of the variance from the mean is explained by the model.

BUT, THIS IS NOT ENTIRELY TRUE.

Some of the scenarios where this metric cannot be used are:

Out of Bag and k-Fold Validation

As we know, in a random forest, a random selection of data and/or variables is chosen as a subset for training for each tree. This means that only a sample of the entire training set is used for training a tree. The remaining points belong to the out-of-bag set and is used for validation.

Keeping a fixed set of data points for validation might not be conducive for models like XGB. Hence, a k-fold validation is used. In a k-fold method, the entire dataset is divided into k folds. One of the fold is used for validation and the others are used for training. The final performance metric is the average of the metric of each fold.

Usually, the number of folds is taken to be 10. 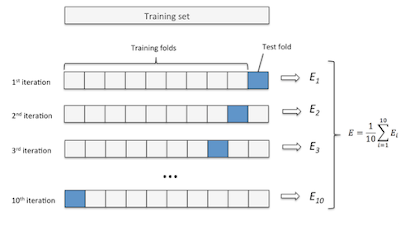 26 Feb 2017 Decision Trees are one of the most intuitive models in the world of perplexing and obscure ML models. This is because of the similarity in the human decision making process and a decision tree.

A decision tree can be visualized and we can actually see how a computer arrived at a decision, which is rather difficult in case of other models. Hence, it is also called as a white box model.

The purpose of this post is to explore some of the intuition behind building a stand alone decision tree and it's ensemble variants, \( Random Forests (RF) \) and \( Extreme Gradient Boosting (XGB) \).

In this post, I will be using a regression tree as an example.

High level steps in building a regression tree are as follows:

What are ensembles and why do we need them?
Ensembles are a combination of various learning models which is practically observed to provide a better performance than stand alone la carte models. This practise is also called as bagging.

One of the main disadvantage of a stand alone model, like a decision tree,which is addressed by an ensemble, is that they are prone to over fitting (high variance). Ensembles are used to average out the noisy data and unbiased (or low biased) models and to create a low variance model.

Two such ensembles for decision trees are Random Forest and XGBoost.

The fundamental issue that both RF and XGB try to address is that decision trees are weak learners (prone to over fitting and depends heavily on the training distribution). Hence, by combining a number of weak learners, we can build a strong learner.

Another variant of RF is called as XGBoost, which uses gradient boosting in order to build the trees. XGB models are used in cases where the data contains high collinearity. This is called as multicollinearity, where two or more features are highly correlated and one can be predicted with reasonable accuracy given the other.

Unlike RF, where the trees are built parallelly with no correlation between the trees, XGB model builds the trees sequentially (and hence, computationally expensive). It learns from each tree and builds the subsequent tree so that the model can better learn the distribution of the target variable i.e the errors are propagated from one tree to the other.

Given the simplicity and the intuitive nature of these models, they are one of the most widely used models for competitive ML like Kaggle. In fact, XGBoost models have won 65% of the competitions on Kaggle.

23 Feb 2017 It is officially declared that the process of awarding H1B visas by the government of US is based on a lottery system i.e a random process.

Therefore, as a random project, I decided to cross verify the claim. Is it truly random or is there a pattern underlying that is not apparent?

The US government releases the data of all applications for H1B and the status of whether they were certified or not. You can find the data at United States Department of Labour.

I built a neural network in order to model this problem, where the features considered were:

There were around 647000 data points for 2016 alone, with the target classes being

Initially, I was getting around 94% accuracy in the first epoch itself. I realised that I failed to understand the data and to build a baseline model first. You can read about the importance of building a baseline model in my blog post here, Importance of Baseline Models.

The data suggested that 89% of the 647000 data points were falling under the 'DENIED' category. The baseline model itself was giving me 89%. Hence, it was no wonder that the model was showing such high accuracies.

In order to handle such a skewed dataset, I decided to create my own dataset with the following distributions:

From this distribution, we can clearly see that the baseline accuracy should be 40%. Due to the limitations on my personal computer, I was able to take only 50000 data points for training. The performance of the model was 61%. A bump in 21% accuracy is nothing to be ignored. At the same time, it does not conclusively prove that the process of awarding H1B visas has any underlying pattern.

I have some more modifications in mind, that I believe would improve the model and can point to some conclusion. I will update this post once I am done with that.

Also, using at least 80% of the data set for training might throw some new light on the pattern. Also, considering more features might help better the model. This would require significant computing power. This would enable us to build a more complicated and deeper neural network that might be able to capture the underlying pattern, if any.

But for now,it seems that there is nothing that can be said about the randomness of H1B visas.

Importance of a Baseline Model

23 Feb 2017 One of the important aspects of building a machine learning model is to understand the data first. Most of us forget this and jump right into modelling. Another corollary to this is that we often times forget to build a baseline model before building something complicated.

A baseline model, in simple words, is the most simple model that you can build over the provided data. The accuracy that is achieved by a baseline model is the lower bound for evaluating the performance of your model.

A baseline model usually does not include any machine learning approaches, rather a statistical approach. It also include heuristics, randomness or simple statistics in order to come up with a value.

Sklearn supports baseline models in the form of Dummy Classifiers:

In the case of regression, a baseline model could be any of the following:

Ideally, the performance of the machine learning model should be much greater than the statistical performance.

In case of models that are already implemented, we can use the performance of the existing models as a frame of reference and they become baseline models.
Older Newer