Common Sense Is Not So Common in NLP

One of the main drawbacks of any NLU neural model is it’s lack of generalization. This topic has been explored extensively in the previous post Empirical Evaluation of Current Natural Language Understanding (NLU). To what can we attribute this lack of common-sense to?

The main reason for this brittleness is the fundamental lack of understanding that a model can gain from processing just text, irrespective of the amount of text it sees. For example, it is common-sense that keeping a closet door open is ok while keeping a refrigerator door open is not good. As humans, we can reason that keeping the refrigerator door open leads to spoiling of food inside since it is perishable while clothes are non-perishable and hence it is ok to keep the closet door open. But, this information is not usually written down anywhere and hence, it is difficult for a model to learn this reasoning.

Also, text is just one modal of information that humans interact with. Humans interact with the world through sight, smell and touch and this information is inherent in understanding. The NLU models lack this crucial exposure to other modalities (which form the root of common-sense). For example, we do not write down obvious things like the color of an elephant. Written text usually talk about elephants in terms of size, like “big elephant with huge tuskers charged at the man”, while “dark grey elephant was spotted in Africa” is practically non-existent. Nevertheless, since we are exposed to pictures of elephants, we know that elephants are usually dark grey in color. If a pre-trained model is asked to predict the color of an elephant, it will fail or might even say it is white since “white elephant” is a valid phrase that is used as a metaphor.

S: The toy did not fit in the bag because it was too big.

S: The toy did not fit in the bag because it was too small.

In brief, why do models lack common-sense?

Evaluating language understanding is as difficult as elucidating the meaning of the word “understanding” itself. Before getting into evaluating computer models on language understanding, let’s explore how we evaluate human “understanding” of natural language. How do we evaluate whether a person understands a particular language? Do we emphasize on the person’s memory of the meanings of different words? Or do we emphasize on the person’s ability to construct sequences of words/tokens that make sense to another human? Or is the ability of a person to read a passage and be able to answer questions on that passage considered to be a good indicator of his/her “understanding” of a language?

It is apparent that trying to quantify a person’s language understanding is a non-trivial pursuit. But, we have tried to quantify it nonetheless with multiple language proficiency tests across the world. The tests generally evaluate on multiple proxies (like sentence completions, fill-in-the-missing-word, passage question answering, essay writing) and the proficiency of a person is evaluated on how well he/she performs on ALL of these tasks. Important point to note here is that excelling on one section (task) and failing in another, points to a failure in language understanding.

We can draw similarity between the language proficiency tests and the natural language understanding evaluation in NLP. There are multiple datasets and benchmarks that are a proxy to the sections in tests. For example, we have the SQuaD (for passage question answering), GLUE (for next sentence predictions) etc.

Similar to the proficiency tests, we can consider a model to “understand” a language when it performs reasonably well across all the benchmarks without special training. We have seen multiple models achieving SOTA on individual benchmarks (surpassing human-levels). Does this mean we have achieved language understanding in computers? There are multiple ways we can evaluate generalizing capacity of any model. We have multiple datasets for the same task but on different domains, like having question answering datasets over multiple domains and multiple languages and any model is expected to perform well on all of them to prove understanding. While recent language models, trained on huge datasets, generalize well over multiple tasks, they still require significant fine-tuning to perform well in these tasks. There are questions raised as to whether this fine-tuning just overfits to the quirks of the individual benchmarks. Another approach is to train a model on ALL of these tasks simultaneously, proposed by McCann et al. The Natural Language Decathlon: Multitask Learning as Question Answering. They propose converting all tasks (summarization, translation, sentiment analysis etc) into a question answering problem.

This blog post covers the current state of natural language understanding and explores where/if we are lacking and is a review of the Dani Yogatama et al. Learning and Evaluating General Linguistic Intelligence.

In order to claim language understanding, a model must be evaluated on it’s abilities to

Dani Yogatam et al., evaluate BERT (based on Transformer) and ELMo (based on recurrent networks) on their general lingustic understanding. The main categories of tasks evaluated against are:

tl;dr We still have a long way to reach generalized language understanding in computers even though we are achieving SOTA in each task.

The size of the SOTA neural networks is growing bigger everyday. Most of the SOTA models have parameters in excess of 1 billion. 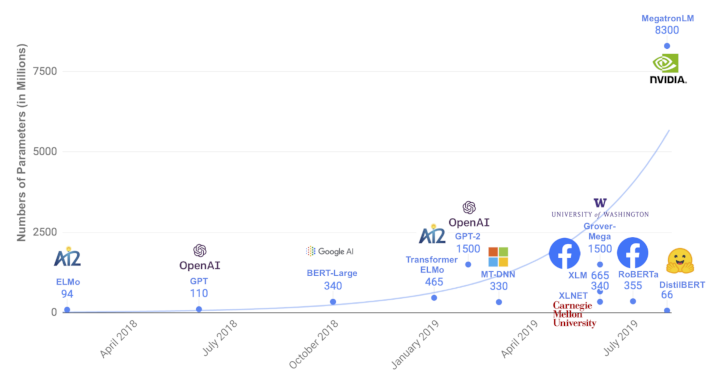 The above image is taken from Huggingface’s DistilBERT

This trend has multiple effects on NLP research:

1. NLP leaderboards are dominated by results from industry, who have access to the vast compute and data resources required to train these humongous models. Companies are incentivized to keep this research proprietary, at least part of it to maintain intellectual superiority among competitors. Open research from the academia is unable to keep up.

3. Large compute resources are required to even run inferences on these models. This compute requires energy, which in turn leaves a bigger carbon footprint.

4. The notion (and proof) that bigger always outperforms a smaller model has inspired researchers to build bigger and bigger models instead of other paradigm shifting ventures. As Francois Chollet puts it, “Training ever bigger convnets and LSTMs on ever bigger datasets nets us closer to strong AI – in the same sense that building taller towers brings us closer to the moon”.

Given these issues, this blog post summarizes the current efforts and research in the direction of reducing model footprints.

Ramanujan, Vivek et al. “What’s Hidden in a Randomly Weighted Neural Network?” proposes that even before train a neural network, a randomly initialized neural network already consists of sub-networks that can perform almost as well as a fully trained model. They also propose an algorithm to identify these sub-networks.

This is a teacher-student architecture, where a bigger model (teacher)’s outputs/hidden activations are used to train a smaller model (student). This has been applied generally to many neural models. For BERT specifically, Huggingface’s DistilBERT, is a good resource with implementation. The output of the bigger BERT model and the output of the smaller model are used to calculate the cross-entropy loss (with or wothout temperature).

Here, we focus on reducing the model size by either removing transformer heads, weights themselves or by removing layers.

Elena Voita et al. Analyzing Multi-Head Self-Attention: Specialized Heads Do the Heavy Lifting, the Rest Can Be Pruned propose removing the attentions heads from the transformer. Similar efforts is proposed by Paul Michel et al. in Are Sixteen Heads Really Better than One?. They propose a Head Importance Score (a differentiation of loss w.r.t the head activation) as a measure to prune heads. Results suggest that we can remove almost 60-80% of the heads without much impact on the performance.

Angela Fan et al. Reducing Transformer Depth on Demand with Structured Dropout propose a way to remove model layers by using a method similar to dropouts. Unlike dropouts, where certain model parameters are frozen during training, they propose freezing certain layers while training. This lends the model to having some layers to be able to be removed and not affect the performance significantly.

Another approach to reduction in model sizes is to convert the floating point numbers representing the model parameters into integers. Intel’s Q8BERT is one of the implementations of this approach.

This is a running summary of the NLP textbook by Jacob Eisenstein. This blog post adds a bit of my personal take on his ideas.

Why neural networks for NLP?

Things to note while designing a classifier

Link to start of the blog series: Interpretable ML