This blog is a summary of the ideas outlined in Chomsky’s Syntactic Structures.

Any language L is considered to be a set of sentences. Each sentence is finite in length and is constructed out of a finite set of elements (words). A sentence can be a sequence of phonemes or letters in an alphabet.

Conclusion: Grammar is autonomous and independent of meaning, and that probabilistic models give no particular insight into some of the basic problems of syntactic structure. 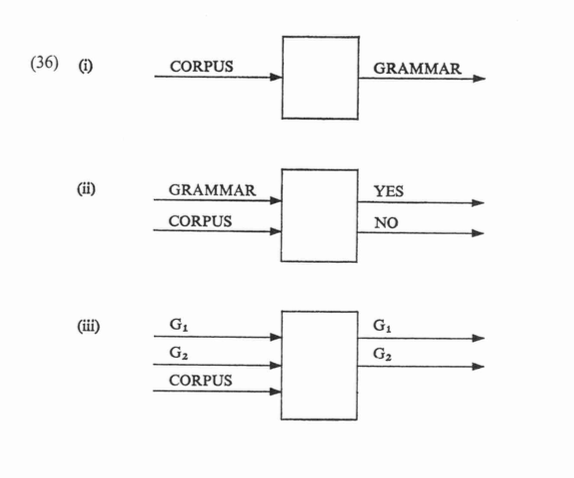 Of the 3 approaches outlined in the diagram above, Chomsky proposes to choose the one in which we can come to a reasonable solution to, hence evaluation. He says, generating (discovery) of the correct grammar given a data corpus is not feasible (we know this is not true now, because we can build language models given a huge corpus).

Reason to have a separate representation for morphemes and phonemes is demonstrated here. The phoneme sequence /eneym/ can be understood ambiguously as both “a name” or a “an aim”.

If our grammar is only a single level system dealing with only phonemes, we have no way of representing this ambiguity. Therefore we need a second morphological layer.

The three levels of parsing of grammar gives us the ability to perform the following representations:

Chomsky argues that there cannot be any relation between semantics and grammar i.e the burden of proof lies on the linguist claiming that the grammar should be dependent on semantics.