Now that we have explored Acoustic Modeling and Language Modeling, the next logical question is, how do we put these things together? Running both AM and LM and combining the results into a list of hypothesis is called as the Decoding Process and this is harder than it looks mainly because of latency and speed concerns which have an adverse effect on RTF.

Decoding speed is usually measured with respect to a real-time factor (RTF). A RTF of 1.0 means that the system processes the data in real-time, takes ten seconds to process ten seconds of audio. Factors above 1.0 indicate that the system needs more time to process the data (Used in meeting transcriptions). When the RTF is below 1.0, the system processes the data more quickly than it arrives. For instance, when performing a remote voice query on the phone, network congestion can cause gaps and delays in receiving the audio at the server. If the ASR system can process data in faster than real-time, it can catch up after the data arrives, hiding the latency behind the speed of the recognition system.

The solution to a majority of latency issues in computer engineering lies in data structures. ASR decoding is no different. In order to make decoding easier, we represent both the AM and the LM as Weighted Finite State Transducers (WFSTs). This brings with it all the capabilities of WFST operations to AM and LM in order to combine them.

Before we dive into WFST, there are other data structures that we need to be introduced to.

Finite representation of a possibly infinite set of strings. It is a Finite State Machine (FSM) where there are states (INITIAL and FINAL). Transition from one state to the other is by consuming a letter (let us call this input).

WFSA is similar to FSA except that there is a cost associated with each state change. Cost is multiplied along one path and added across paths. Therefore, even though there are multiple ways of going from the initial state to the final state, we take the path with min cost. 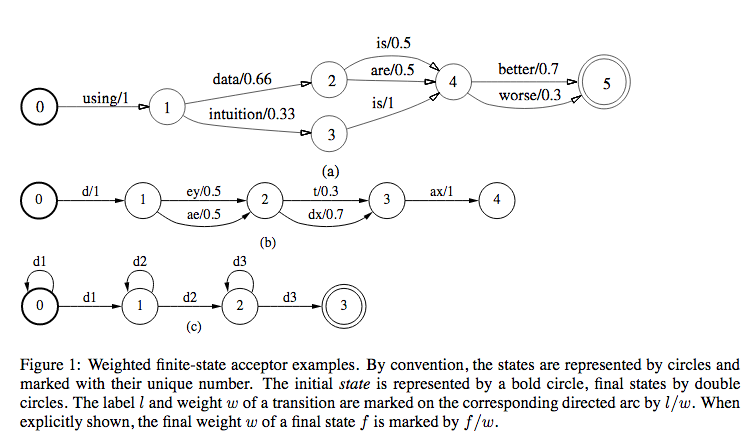 In the above figure, we can see 3 types of applications of WFSAs in ASRs.

FST is similar to FSA except that for each arc, we have both input and output symbols. For the corresponding state transition, we consume the input symbol and emit the output symbol.

WFST is similar to FST except that there is a cost associated with each state change. All the operations on cost that we perform on WFSA are applicable here too. 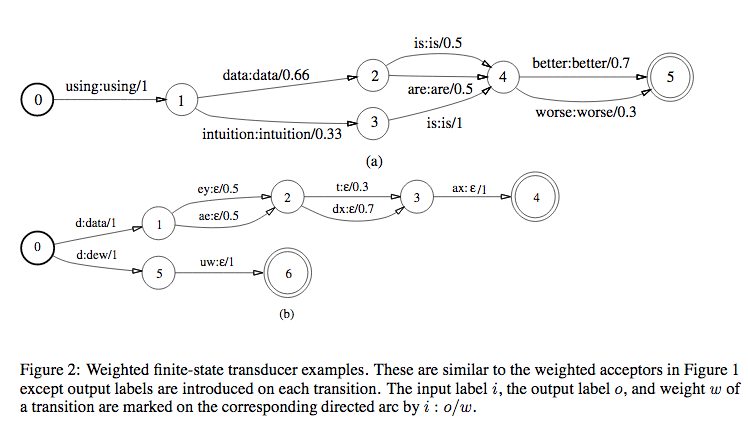 The figure above is same as the WFSA but with input:output on each state instead of just input. \(\epsilon\) is a null symbol.

Now that we know what FSA, WFSA, FST and WFST are, why do we choose WFST over other data structures to represent models in our ASR? WFST (which is a transducer) can represent a relationship between two levels of representation, for eg, between phones and words (like figure 2(b)) or between HMMs and context-independent phones. 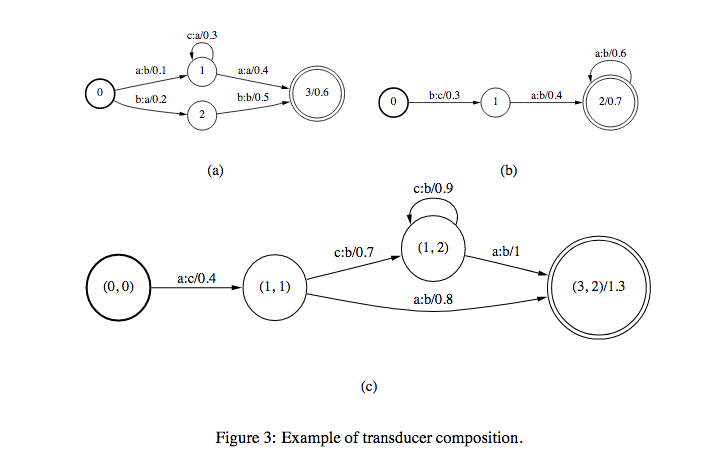 In this, WFSTs should satisfy the following conditions:

The above conditions make it easier to compute determinization since from each state, we have only one transition for one input symbol.

This is to simplify the structure of the WFST.

There are four principal models for speech recognition:

Consider the WFSTs in Figure 2. Figure 2(a) is the grammar \(G\) and in Figure 2(b) we have pronunciation lexicons \(L\). If we do a composition of these two transducers, we get a new transducer that takes phones as input and gives words as output (These words are restricted to the grammar \(G\) since \(G\) can’t accept any other words). So, we get \(L \circ G\).

The above composition is just a context independent substitution (Monophone model).

We have the following state transitions for the triphone model.

After this, we perform Determinization and Minimization on this.

Adding HMM to model the input distribution, WFST for speech recognition can be represented as a transducer which maps from distributions to words strings restricted to G.