This blog post is a summary of the case study made by Google when it first launched it’s voice services. For any company/person trying to undertake this endeavor of building a voice product, this early stage case study is a huge knowledge bank. For one, it is always better to learn from someone else’s mistake rather than our own and two, majority of the underlying architecture of Google’s voice platform has remained the same over the years. Going through this case study gives us an important insight into how Google does voice.

The original case study file can be found here

Instead of 2 separate queries, in 2008 a new version of GOOG-411 was released which could take both entities as input in a single sentence.

In November 2008, Voice Search was first deployed for Google app users in iPhone.

The details of these systems are extensive, but improving models typically includes getting training data that’s strongly matched to the particular task and growing the numbers of parameters in the models to better characterize the observed distributions. Larger amounts of training data allow more parameters to be reliably estimated.

For Google Search by Voice, GOOG-411 acoustic models were used together with a language model estimated from web query data.

39-dimensional PLP-cepstral coefficients together with online cepstral normalization, LDA (stacking 9 frames) and STC. The acoustic models are triphone systems grown from deci-sion trees, and use GMMs with variable numbers of Gaussians per acoustic state, optimizing ML, MMI, and ‘boosted‘-MMI objective functions in training.

Google uses written queries to google.com in order to bootstrap their language model (LM) for Google search by Voice. The large pool of available queries allowed them to create rich models. However, they had to transform written form into spoken form prior to training. Analyzing the top million vocabulary items before text normalization they saw approximately 20% URLs and 20+% numeric items in the query stream.

Google uses transducers (FSTs) for text normalisation. See the Finite State Transducer section in blog post for an introduction to what transducers are.

In the annotator phase, they classify parts (sub strings) of queries into a set of known categories (e.g time, date, URL, location). Once the query is annotated, each category has a corresponding text normalization transducer \(N_{cat}(spoken)\) that is used to normalize the sub-string. Depending on the category they either use rule based approaches or a statistical approach to construct the text normalization transducer. They used rule based transducer for normalizing numbers and dates while a statistical transducer was used to normalize URLs.

Ideally one would build a language model on spoken queries. As mentioned above, to bootstrap they started from written queries (typed) to google.com. After text normalization they selected the top 1 million words. This resulted in an out-of-vocabulary (OOV) rate of 0.57%. Language Model requires aggressive pruning (to about 0.1% of its unpruned size). The perplexity hit taken by pruning the LM is significant - 50% relative. Similarly, the 3-gram hit ratio is halved.

The question they wanted to ask was, how does the size of the language model affect the performance of the system. Are these huge numbers of n-grams that we derive from the query data important?

Answer was, as the size of the language model increased, a substantial reduction in both the Word Error Rate (WER) and associated WebScore was observed. 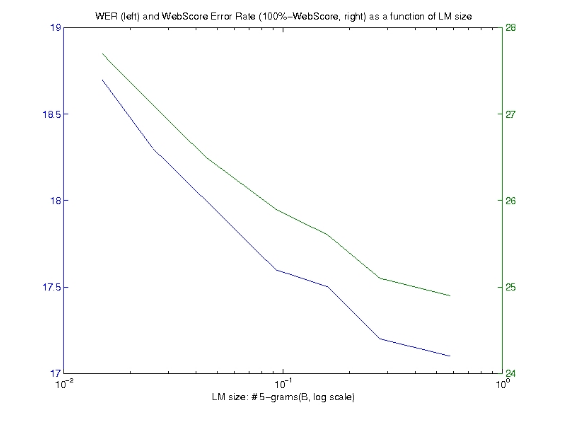 They built locale specific English language models using training data from prior to September 2008 across 3 English locales: USA, Britain, and Australia. The test data consisted of 10k queries for each locale sampled randomly from Sept-Dec 2008. The dependence on locale was surprisingly strong: using an LM on out-of-locale test data doubled the OOV rate and perplexity.

They also built a combined model by pooling all data. Combining the data negatively impacts all locales. The farther the locale from USA (as seen on the first line, GBR is closer to USA than AUS), the more negative the impact of clumping all the data together, relative to using only the data from that given locale. 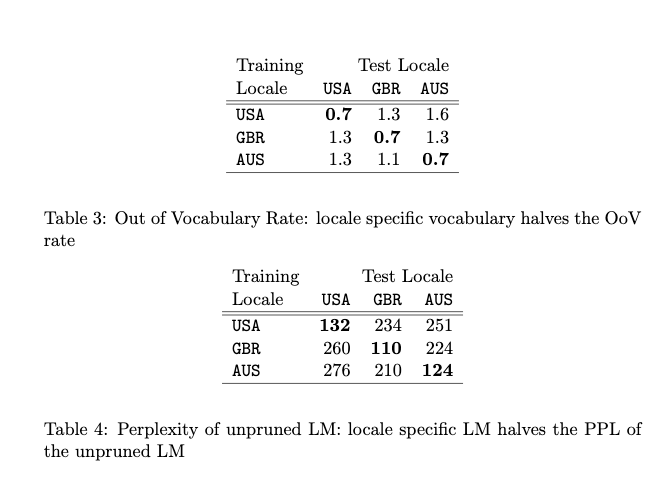 The case study explored further on UI/UX observations regarding visual interfaces, including how and where the button should be placed, how to show the ASR alternatives, intent based navigation to apps (Drive to vs Navigate to) etc